RealClearPolitics - The Future of the World Economy

RealClearPolitics - The Future of the World Economy
"The next crisis could be a dollar crisis," he warns. Foreigners own roughly $23 trillion in U.S. stocks, bonds, real estate and factories; Americans own about $20 trillion in foreign assets. That's the reality of being the world's largest debtor. A loss of confidence could trigger a sell-off of American stocks and bonds that -- given the dollar's role as global currency -- would reverberate around the world.
Forewarned is forearmed - SP
Posted by Bob Beatty at 12:36 PM 1 comment:

"Until the appearance of Barack Obama on the national scene, I knew of “them” only from an old sci-fi movie in which huge ants (“Them!”) ate people.

But there are new monsters in America, and I am starting to wonder whether I am to be considered among them: those of the uninvolved and uninformed lives, the bar-raisers, the downright mean ones, the never deserving of respect ones, the Vegas junketeers, the Super Bowl jet setters, the tuition stealers, the faux-Christians who do not pay higher taxes, the too much income makers, the tormenters of autistic children, the polluters, the enemies deserving of punishment, the targets to bring a gun against, the faces to get in front of, the limb-loppers, the tonsil pullers, the fat cats, the corporate jet owners, the one-percenters, the stupidly acting, the not paying their fair sharers, the discriminators on the “way you look”, the alligator raisers and moat builders, the vote deniers, the clingers, the typical something persons, the hunters of kids at ice cream parlors, the stereotypers and profilers, the cowards, the lazy and soft, the non-spreaders of money, the not my people people, the Tea party racists, the not been perfect and mistake makers, the disengaged and the dictating, the not the time to profiteers, the ones who did not know when to quit making money, and on and on.

My God, man, how did Barack Obama & Co. conjure up so many demons?"

Keystone Madness
"Now, reacting to a congressional deadline to decide, Obama rejected the proposal. But he also suggested that a new application with a modified Nebraska route -- already being negotiated -- might be approved, after the election. So the sop tossed to the environmentalists could be temporary. The cynicism is breathtaking."
Indeed! - SP
Posted by Bob Beatty at 8:00 AM No comments:

guns | crime | shooting | The Daily Caller
At the top of the list:
1. Guns have only two enemies rust and politicians.

Dear Andrew Sullivan: Why Focus On Obama's Dumbest Critics? - Conor Friedersdorf - Politics - The Atlantic
"I submit that had Palin or Cheney or Rumsfeld or Rice or Jeb Bush or John Bolton or Rudy Giuliani or Mitt Romney proposed doing even half of those things in 2008, you'd have declared them unfit for the presidency and expressed alarm at the prospect of America doubling down on the excesses of the post-September 11 era. You'd have championed an alternative candidate who avowed that America doesn't have to choose between our values and our safety. Yet President Obama has done all of the aforementioned things. "
Posted by Bob Beatty at 9:56 AM 1 comment:

Death by Wealth Tax | Hoover Institution
One only has to do a cursory study of the French Revolution to understand the truth of this article. If taken to the extremes that the current Administration and others in Congress (i.e most Democrats) would like to take them, not only will this country CONTINUE to suffer but it will become worse than any of us can imagine! - Sp
Posted by Bob Beatty at 2:43 PM No comments:

"Conservatives Remain the Largest Ideological Group in U.S." (And, of Late, the Dumbest) @ AMERICAN DIGEST

"Conservatives Remain the Largest Ideological Group in U.S." (And, of Late, the Dumbest) @ AMERICAN DIGEST

"These people are deeply stupefied and confused. Ideology will do that to you. They seem to think, to actually believe, that this coming election is about only voting if you can vote for a candidate you like. Let me disabuse these kids of this silly notion right away. The election of 2012 ain't a conservative popularity contest. It's a war to, first, last, and always, destroy any possibility of a second term for Barack Hussain Obama.

If you call yourself a Conservative you need to read and and UNDERSTAND this!! Pure ideology will NOT win this election! We ALL need to unite behind the candidate that is finally chosen and defeat the greatest threat to this country in our generation! - SP

Posted by Bob Beatty at 6:21 AM No comments:


The payroll-tax-cut debate is not really about the payroll tax, which is a very weak-kneed economic stimulant and a lackluster job creator because of its temporary nature. Without permanent incentives at lower tax rates, these rebates don't do anything for growth and jobs.

Instead, the key to understanding the payroll-tax debate is to grasp President Barack Obama's leftist vision of taxing successful earners (the millionaire surtax) and his obsession with clean energy at the expense of fossil fuels. These are ideological positions. They support the Obama vision of class warfare and his attachment to radical environmentalism.

And the key to understanding this state of affairs is the disposition of the TransCanada Keystone XL pipeline, which Republicans cleverly threw into the payroll-tax debate as the only real job creator.

By siding with the radical greenies and standing against the Keystone pipeline, Obama has turned his back on the most traditional voting bloc in the Democratic Party: blue-collar, hardhat workers.

Manufacturing workers. Construction workers. Truckers. Pipefitters. Plumbers. The Keystone opposition coming out of the White House is completely alienating all these people, the folks who work with their hands. And it's these workers who have been decimated in the recession far more than any other group in the economy.

David Barnett, the head of the United Association of Plumbers and Pipefitters, told me on CNBC that unemployment is currently running at 20 percent to 25 percent in this blue-collar sector. He has repeatedly lobbied the White House to allow the Keystone pipeline to go through, and he notes high environmental standards in the work his men do. And yet even now, three years after the initial Keystone reviews began, the issue is still not resolved.

How can you have a jobs bill without putting blue-collar workers back to work? Answer: stubborn ideological insistence.

The Teamsters support the Keystone. So does the AFL-CIO. So do the machinists. And along with the plumbers and pipefitters, so does the Laborers' International Union of North America.

And we're not just talking about the 20,000 jobs that would accrue directly from the pipeline, but the secondary and tertiary jobs from a long supply chain that total well over 100,000.

As of this writing, the White House may dump the millionaire surtax. But that's not much of a concession, since it never would have passed anyway. Republicans are adamant. It's a nonstarter in the House, and probably the Senate, too. Meanwhile, Republican Senate leader Mitch McConnell told me the Keystone pipeline is the key to the payroll-tax-cut deal.

Both practically and symbolically, Obama's obsessive stance against the pipeline rips a huge split in the Democratic Party, and in the country as a whole. His manic support of clean energy -- just think Solyndra -- has blocked out any rational evaluation of the ongoing importance of oil and natural gas -- including the oil-and-gas-shale fracking revolution that has become a huge jobs creator in North Dakota, Pennsylvania, Texas and elsewhere.

The Obama administration recently shut down the Utica shale field in Ohio because of an Agriculture Department objection. Two hundred thousand jobs are at stake. A field in Wyoming may be shut down. New York state desperately needs jobs and growth, but is wavering because of EPA actions elsewhere.
And with the Keystone ruling delay now extending for another year, the Keystone folks might give the whole project up in the U.S., in favor of a Pacific Ocean pipeline in Canada that will sell oil to the Chinese.
While the U.S. dithers, the Canadians are taking action. As a shot across the unbalanced environmental bow, the Canadian government is opting out of the Kyoto global-warming treaty. As energy analyst Daniel Yergin writes, while the unstable Persian Gulf countries represent 16 percent of U.S. oil imports, Canada represents 25 percent.

Yergin also writes that by the beginning of the next decade, Canadian oil sands could double production to 3 million barrels per day. That means an even higher share of U.S. imports coming from our friendly neighbor and largest trading partner.

So in addition to being an economic-stability issue, this becomes an energy-independence issue and even a national-security issue.

Obama's decisions on the pipeline and other new energy breakthroughs are inimical to U.S. interests. They also are hostile to Democratic Party hardhats who may desert the president in droves come next November.

On top of all that, what may be America's leading new source of job creation will be stifled.
Posted by Bob Beatty at 6:52 AM No comments:

The Hot Race Nobody Is Talking About

A battle for the soul of the Republican party? 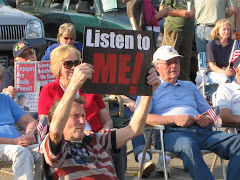 Quote of the day

"The real destroyer of the liberties of the people
is he who spreads among them bounties, donations and benefits."
Plutarch


Welcome Seymour/Jackson County bloggers! I decided that it was time to venture out into another one of the lanes on the information superhighway and put together this blog. It seems that some of the folks that I have been bombarding with emails about the ongoing political craziness don't appreciate me filling up their email boxes (rightfully so, I guess).So I have established this blog as a way to communicate some of the wealth of information that I look at on a regular basis.

This marvel called the Internet gives us a wonderful opportunity to communicate mass quantities of information so quickly and efficiently. And in today's political environment it is having a profound impact, as we witnessed in last week's election.

In the days of the founding of this Republic, the citizens established Committees of Correspondence in order to keep informed of what was happening in each of the Colonies but they were hampered by the weeks and months that it took to get a written communique throughout the country.

Today we can send such much more info in milliseconds and it is making a difference!So that is my mission here - to provide info and correspondence to those who are concerned with the direction of our beloved Republic. I hope you join with me, I intend to leave the comments section open (for now), so let me know your thoughts. Hopefully you will find the things talked about here and the links provided to be of some benefit.